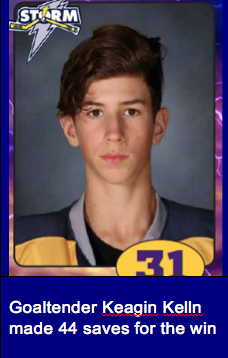 U15AAA Storm Pick Up a Win in St. Albert

The U15AAA Storm travelled to St. Albert to take on the, always-challenging, Sabres and came away with a 5-3 win. Bowen Grycan got the Storm on the board with just under 3 minutes left in the first, as he walked out of the corner and sniped a shot to even the score at 1. Camden McNaughton made it 2-1 early in the second before the Sabres tied it up. Keets Fawcett put the Storm ahead 3-2, once again the Storm scoring in the last 3 minutes of a period. Even though the Storm snuck out of the second period with a one-goal lead, they were outshot 22-9, and Head Coach Ryan Allen was less than impressed. "The second was probably one of our worst periods of the year. We were running around and standing around watching, turning pucks over and just not sharp." In the third period, the Storm found their stride. Eric Giesbrecht put the U15AAA's up 4-2 with a nice burst of speed down the left wing. But just 20 seconds later, St. Albert scored to creep back to within one. The Storm fought back and less than two minutes later Jaxen Gauchier scored his first of the season, and regained the two goal lead, making it a 5-3 final.

The home opener for the U15AAA Storm was a very entertaining affair with the home squad taking the game 2-1. Due to COVID scheduling, it was the third straight game between the two teams, with the first ending in a 2-2 tie and the Storm dominating the second game 8-1.

The Storm had an abundance of time in the Saints zone early in the first period but could not get a puck by PAC goaltender, Christian Francis. Assistant Coach Paul Therrien thought that his group came out a little slow. "I thought we were a bit flat in the first period. Coming off our last win against them (8-1 win), the Saints were maybe a bit tougher than our guys expected." With just over 5 minutes left in the period, forward Bowen Grycan (assist to Dylan Hoath) popped a power-play marker, his third goal of the season. A nice shot from the slot that beat Francis high blocker, giving the Storm a 1-0 lead after the first.

The Storm dominated the second with 24 shots and 9 scoring chances, spending half the period in the Saints end of the ice. Coach Therrien was happy to see the players respond in the second. "Our fore check got better as the game wore on. Our play in the offensive zone generated tons of scoring chances from puck possession, which started with our ability to fore check and force their defensemen." The increased pressure did not result in any goals however, as Francis continued to make several key stops for the Saints.

Down 1-0 entering the third, the Saints picked up the pace and had several chances of their own. Early in the period, Saints forward Casey Laevens scored a short-handed goal, a shot that deflected off a defender's stick and over the shoulder of Storm goaltender, Karson Bradford, to even the game at 1-1. Just over 3 minutes later, Billy Barbarich took a pass from Keets Fawcett and scored on a shot from the slot to put the Storm up 2-1. The Saints pulled their goaltender with a little over two minutes remaining and had some good chances to even the game, but the Storm held the lead. Eric Giesbrecht just missed hitting the empty net from just inside the PAC zone. Therrien thought Giesbrecht, a first-year Bantam, was noticeable all game. "Eric has the ability to beat his man and go from the half wall to the front of the net so quickly to create offensive chances", said Therrien, who also had some praise for defenseman Camden McNaughton. "He was very tough in his own end, made some hard plays with the puck, and made lots of direct passes to move the puck up." After center Niles Driedger left the game with an injury, winger Jackson Lee stepped in to the fill the role at center. "Jackson had a good game, he did well shifting to center after Niles had to leave. Lee is always the first guy back to his own end and is defensively responsible". Overall, the win moves the Storm to a 2-0-1 record and while Coach Therrien is pleased with the overall effort, he knows the season is young and the players are still adapting. "Guys are still understanding game speed at this level, and sometimes we are not taking the open ice that is available and not capitalizing on our chances. But we know we have a great group and will continue to work on things in practice."

More often that not, when a team gets 60 shots on the opposition net they leave the ice with 2 points. That was not to be this night as the Storm held the lead all game until just under two minutes remaining when the Saints tied it up. The Storm peppered PAC goaltender, Christian Francis, with 60 shots but could only manage to get 2 by him. Storm Head Coach Ryan Allen thought his club could have put themselves in a better position. "We carried most of the play and generated chances so with the amount of shots we had, to only score two goals was not good enough".

The GPAC team struck quickly, just 3:35 into the game when Bowen Grycan scored with the assist going to Luke Scheck. 9 minutes later, Brock Robertson put the Storm up 2-0 with Bowen Grycan earning his second point of the evening with the helper.

Storm goaltender Karson Bradford stopped 30 of 32 shots directed his way. Over all, Coach Allen was happy with the team's energy. "For the first game of the year, we had a great effort and we'll take the point" he said.

After selecting their team in August, coaches Ryan Allen and Paul Therrien were extremely pleased with how deep the team looked, both in overall skill and skating ability. That depth was on full display with 13 players contributing on the scoreboard in a convincing 8-1 win against the Saints. The Storm took a 1-0 lead to the dressing room after one period thanks to a goal by Keets Fawcett (assist to Dylan Hoath). "We made some adjustments after the first in terms of faceoffs and D-zone and we challenged everyone to be better" said Coach Allen. Those adjustments paid off in a big way. The Storm broke the game open at the start of the second when the team scored 4 goals within a span of 6:03; Eric Giesbrecht (assist to Reis Nyland), Billy Barbarich (Dylan Hoath, Brock Robertson), Bowen Grycan (Korban Knezevich), Casey Leavens (Jackson Ward) had the Storm up 4-0 before the game was half over. The Saints scored what would be their only goal of the game at 6:23. Reis Nyland (unassisted) chipped in with just 26 seconds left in the middle period to put the Storm up 5-1 after 2. As in the second period, the Storm started the third with a flurry, scoring 3 goals in 3:21. Eric Giesbrecht, with his second of the game (assist to Reis Nyland), Nyland on the power play, with his second (Luke Scheck and Jackson Lee) and Camden McNaughton (unassisted) put the game out of reach as the team glided to an 8-1 win. With Nyland leading the way with 4 points, Coach Allen was also impressed with the first year players. "It's a big jump from PeeWee to AAA", said Allen, "and Gauchier, Giesbrecht, and Walker were really noticeable."

Overall, of the 10 goals scored over the weekend for the Storm, 9 were at even strength, something which again, illustrates the depth of the squad. At the other end of the ice, goalies Karson Bradford and Keagin Kelln held the fort . "Both goalies were solid and gave us a chance to win both games" said Allen.

Next action for the U15AAA Storm is Saturday, October 24 at the County Sportsplex against the same PAC Saints.