Coming off a shutout win two days previous, the U16AAA Storm knew that the PAC Saints would bring a better effort to Grande Prairie. In Saturdays game, Storm goaltender Vaughn Kaliel made 42 saves to backstop the club to a 3-2 win. Head Coach Brett Stephenson wasn't surprised that the Saints upped their game. "They came out hard, PAC played well, it was almost like a reversal of the last game. They outshot us and we were fortunate to get the win." The teams traded goals a minute apart in the first period with Steel Burke scoring on the power play, assisted by Jaxon Young. The Saints quickly tied the score, but with just over 2 minutes left in the first, Burke notched his second goal, assisted by Spencer Rheaume and Cade Reber. The Saints tied it 2-2 in the second, but Jaxon Young scored the winner 7 minutes into the third, with Burke getting his third point of the game on the assist. The Saints pulled their goalie for an extra attacker with 2 minutes left and pressed hard in the offensive zone, but the U16's held on for the win. Stephenson noted the composure his team displayed "Our guys didn't panic, they got in shot lanes, we did a good job and didn't get too excited with their net empty."

Sundays game saw a scoreless first period with the Storm holding the advantage on the shot clock 17-5. The flood gates opened up in the second period, with the Storm scoring 5 straight goals; Spencer Rheaume, Zayn Knezevich, Deizel Leet, Devon Barclay and Carter Hensch all finding the back of the net. Stephenson was happy with the first 40 minutes. "That might have been the two best periods we've played all year. We only had 8 forwards so the guys were quick-shifting and making sure we were keeping things simple. The difference was we got rewarded in the second period."

Rheaume added one more in the third, while the Saints scored 3 in the third to make it a 6-3 final. "We let off the gas a bit in the third, took some penalties and that always loses momentum", said Stephenson. Overall, it was a successful 3 games in 4 days for the Storm, and the head coach is quick to credit the players. "The players have done a good job, and kudos to them, they deserve to be 3-0 on the season. The whole D-core has done a really good job, and with only 8 forwards, everyone chipped in and contributed. Everyone is going out every second or third shift and doing a great job."

A Shutout Win to Open the Season

A pair of power play goals, two empty netters and a 32 save shutout from goalie Nathan Crawley added up to an impressive 4-0 season-opening win on the road Thursday night for the Boston Pizza U16AAA Storm. Head Coach Brett Stephenson was pleased with the 44-shot effort. "It was nice to shake off a little rust.  I felt we got better as the game went on and we generated a lot of shots off our cycles", said the coach. Spencer Rheaume got the Storm off to a 1-0 start just 4 minutes in on the power play (assisted by Deizel Leet). Jaxon Young put the Storm up 2-0 halfway through the second period with another power play marker, with assists going to Steel Burke and Jett Fogle. Stephenson said both Rheaume and Young took advantage of open ice in the offensive zone. "Both guys were able to walk off the wall when they had an open lane, Spencer had a beautiful shot, and Jaxon has such a heavy shot which beat the goalie".

It stayed 2-0 for much of the third when the Saints pulled their goalie for the extra attacker and Rheaume, with this second of the game (unassisted) and Carter Hensch (Deizel Leet), were able to add insurance markers to make it 4-0. Stephenson was happy with the effort from the team. "We were pretty good for our first game.  Our D generated lots of shots, Nathan Crawley made some really good saves off of their rushes. After Liam Ray hurt his shoulder 8 minutes in, we went down to 5 D and they did a great job, including Zayn Knezevich who dropped back from forward". 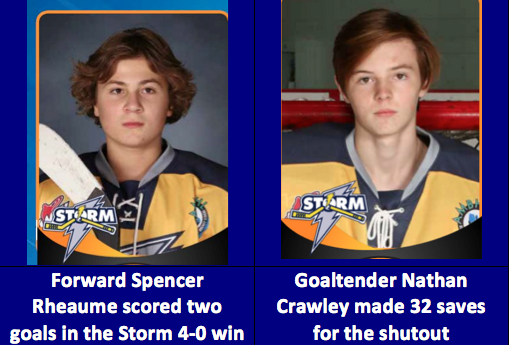