To put things in perspective, the St. Albert Raiders lost ONE game during the regular season last year. So for the U18AAA Storm to be playing their first three games against one of the top teams in the league, it would be quite the challenge. After playing to a 2-2 tie in the home opener, the Storm travelled to St. Albert for a 2 game set.

On Saturday, special teams were not kind to the Storm. They gave up 3 power play goals, as well as a short-handed tally and managed 1 power play goal in 7 chances. The Raiders carried the play early on, while the Storm struggled to get a shot on net until after the 10-minute mark. But 11 minutes in, Landon Hedges put the Storm up 1-0 with a power play goal, assisted by Codie Saunders and Ethan Boutcher. The Raiders tied it up 3 minutes later and the first period ended 1-1, with St. Albert leading on the shot clock 10-3. The Raiders popped 2 quick ones within 1:10 in the first half of the second, at which point Head Coach Chris Schmidt called a time out.

That seemed to motivate the team, as they created some chances in the offensive zone with Saunders and Boutcher both ringing shots off the post. "There were times where we threatened, it just wasn't consistent enough" said Head Coach Chris Schmidt. The Raiders added a power play goal towards the end of the period and the home club carried a 4-1 lead into the third. The Raiders added 3 more in the third before Codie Saunders scored his first of the season, with assists going to Tye Evans and Landon Hedges.

The two teams battled again on Sunday with the Storm on the defensive for the initial part of the 1st period. The Raiders took advantage on the power play to go up 1-0 eight minutes into the frame. The Storm responded 33 seconds later when they caused a turnover in the offensive zone. Mason Kyllo fired a quick shot high glove for his first of the season with assists to Denon Bamber and Jaydon Gordey. The tie was short-lived however, as St. Albert took the lead back 40 seconds later scoring off a faceoff win in the Storm end. In the second period, the Raiders took advantage of a 4 minute power play to make it 3-1. The Storm pushed back with some offensive zone time; creating several offensive chances including a breakaway by Landon Hedges who was denied by Raiders goaltender, Liam Bechthold. At the 15 minute mark, the Storm struggled to clear the puck and the Raiders went up 4-1 to end the period, also leading on the shot clock 31-16. Midway through the third, Hedges and Saunders had a great opportunity on a 2-0 breakaway, but were stymied again by Bechthold. Two minutes later, the Raiders closed out the scoring to make it 5-1.

Reflecting on the weekend, Coach Schmidt said there are lessons to be learned. "The Raiders are such a good team, it's a good lesson for us. We have some things for sure to work on over the next few weeks to get ready for the next set of games. They are just a step quicker and a step faster, and are the quickest team we'll play in the North. They are aggressive and they come at you in waves. They are a quick, big team. Now we know where the bar is set in the North", stated Schmidt. "We've got the guys that are willing to put the work in so that's a positive for sure."

He was happy with the level of compete his players showed. "The guys showed some battle playing through (the physical) stuff. I thought a lot of guys showed well. I thought Hedgie had a really good two games. He was always working, and was a good example of hard work and never-quit for the other guys."

The next set of games is not scheduled until November 28 & 29 when they host SSAC. Schmidt indicated that there is a chance there may be additions to the line-up by that time "We are little short-handed waiting on what's happening with some junior players. We have an inexperienced team (but) we'll work on some things and be better for our next set of games". 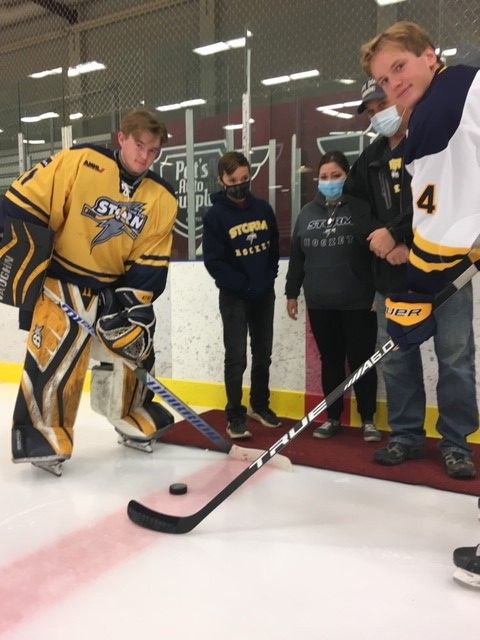 The Grant Family and the U18AAA Storm honour Noah Grant with a ceremonial faceoff prior to the game.

It was an emotional start to the Storm's first game in 7 months.  Noah Grant, the 13 year-old GPAC hockey player, who passed away tragically this past August was honoured before the game.  Noah, who wore number 11, was honoured with an 11 second moment of silence. His parents, Mike and Cara, and brother Koltin then dropped the ceremonial puck in a face off taken by Storm goaltender Terris Lappenbush, who is also wearing number 11 this season to honour his friend. It was a fitting, yet emotional moment for the local hockey community.

Once the puck dropped the pace was quick and the Storm found themselves on their heels for the first 5 minutes of the game, playing in their own end for much of the time. "With no exhibition games, it was the first game at this level for a lot of players, I thought the returning players looked a little more comfortable right off the bat, but 10 minutes in, the vast majority of the guys settled in and really played hard and did a lot of good things" said Head Coach Chris Schmidt. "For the most part we handled their pressure well.  We expect to spend time in our own zone and it's a question of what you're giving up during that time.  I thought we did a good job."

The Raiders took advantage of a power play with Captain Jaxon Dube opening the scoring on a partial breakaway 7 minutes in.  The tight-checking game continued into the second, when at the 13-minute mark, the Storm evened the score, taking advantage of their own powerplay with Simon Hamilton batting the puck out of mid-air past Raider goaltender Ethan Kadatz.  Assists on the play went to Denon Bamber and Jaydon Gordey.

The quick pace continued with good chances at both ends. Raider forward, Carmelo Crandell, found the back of the net at the 13-minute mark to put the raiders up 2-1 after 40 minutes. It stayed that way until 8 minutes into the third when Connor Klassen fed Denon Bamber down low.  Bamber found Landon Hedges in the left circle and Hedges put a shot high glove-side to even the score at 2. "It was a nice play down low, he (Hedges) found the quiet zone and got a shot off quick" said Schmidt.  The remainder of the third saw some good chances at both ends with the Storm hitting a post on another power play. Meanwhile, Lappenbush, who made 30 saves, held the fort for the Storm making several solid stops. Schmidt complimented his starting goalie on his performance. "I thought Terris had a heck of a game, especially for the relationship he had with Noah (Grant), he handled himself really well.  He controlled rebounds and saw the puck really well,"

Overall, Schmidt was happy with his team's resilience and compete level. "St. Albert has a big, aggressive team but we had guys stand in there, making plays on the walls and blocking shots.  You have to play big, even if you are small"

The team travels to St. Albert this weekend for a 2 game set Saturday and Sunday.