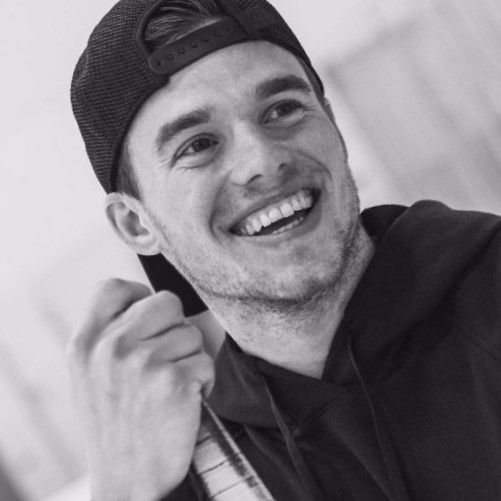 For local hockey fans who attended Junior A Storm games a few years ago, you may remember watching an undersized forward wearing number 10 buzzing around the ice, creating havoc, and making things difficult for the opposition defensemen.  Jordan McTaggart was a tenacious hockey player. Always working hard and, while not always a top 6 forward, he was a player who could be relied upon to make plays and "stir the pot" on the ice.  Far from an imposing player, McTaggart played bigger than his physical stature. It took hard work and commitment to get there. McTaggart notes that he had to earn his ice time. "My heart was always set on playing Junior hockey here in Grande Prairie.  I spent a lot of time playing minimal minutes or not playing at all."

A product of Grande Prairie minor hockey, McTaggart rose up through the ranks to play on GPAC elite teams before playing three seasons with the Junior A Storm.  "I was definitely a late bloomer in terms of physical development and skill as a hockey player.  I just squeaked on to the Bantam AAA team as a second-year bantam, but it really didn’t click for me until age 16 or 17, as far as what it takes to be an elite hockey player. Going into my first year of Junior I weighed 136 pounds; so at weigh-in I had a tracksuit on and two full bottles of water in my pockets, and that got me up to 142 pounds",  laughed McTaggart, the Strength and Conditioning Coach for the Junior A Storm, all GPAC teams, and several minor hockey teams in the Grande Prairie area. He also offers personal and private training to the general public.  McTaggart, known as "Tags" in hockey circles, is also the Assistant Coach with the U18AAA Storm, working with Head Coach Chris Schmidt.  In fact, a decade ago McTaggart played on the same AAA team that he now coaches. He enjoys interacting with the players and knows the value of being a role-model and mentor for young athletes. "It is important to have quality workouts,  but a lot of kids enjoy the social factor and that connection with being able to talk to someone whether it’s about how your day went, or advice about hockey, I think that’s what kids look for and want the most."

After completing his tenure with the Storm, McTaggart had a few options. “I was actually going to go play in the US and take Power Engineering, but I had applied to Red Deer College as well.  I was always passionate about fitness and working out. That was a major reason I was able to play the game as long as I did, especially being an undersized guy.”

He ended up playing for three years at Red Deer College and two more at the University of Alberta-Augustana. Perhaps as importantly, McTaggart began forming his strength and conditioning future by studying Science with a major in Kinesiology. Back in Grande Prairie during the summers, McTaggart worked with Tina Caron and Tanya Morgan in the Power Plus summer hockey program.  That helped link McTaggart’s schooling and passion for hockey together.

After a modest beginning, working with about 15 players in his parent’s garage, McTaggart expanded his training services, working out of the Clairmont hockey arena for 3 years.  This past summer, he moved his business to 100th avenue, across the street from Doug Marshall.  Simply put, McTaggart says he helps players "get bigger, stronger, faster, more athletic and in better shape".  As a conditioning coach, McTaggart balances the role of motivator, while also setting firm expectations for his athletes.  "It’s something I have had to fine-tune.  Some athletes you can be a little bit stern with and they will thrive on that, with others, you have to have more of a calm conversation.  It’s just finding out the personalities and how each athlete prefers to interact."

Looking back, McTaggart acknowledges mentors in his life, just as he is a mentor and role model to dozens of young hockey players. "My Dad is one of the hardest working guys I’ve ever seen.  He’s now semi-retired and still puts in 12-16 hour days.  We compete to see who is out of bed first thing in the morning.  I've also learned a lot from Mark Malekoff, my Midget AAA coach, and continue to learn a lot from him.  I still seek him out for advice."

The passion for being behind the bench began a few years ago "I started coaching spring hockey while I was still playing junior, and I learned how to manage a bench.  Dealing with lines, and learning how to interact, or not interact with parents was all good experience.  Working with Power Plus and various hockey schools kept me in the game and I've learned a ton working with Schmidty, just by watching him and how he goes about things and interacts with players."

Going forward, McTaggart is excited about what lies ahead for him.  "I’ve always thought about having my own gym and I'm taking classes full-time right now and there are a few options I'm looking into.  I absolutely love being involved in training the teams, and I know it’s important from a hockey and on-ice performance perspective, but there is so much more it teaches, health and lifestyle wise.  I would like to move up the ranks in coaching to become a head coach.  I would also like to help Grande Prairie be more of a spotlight for player development". 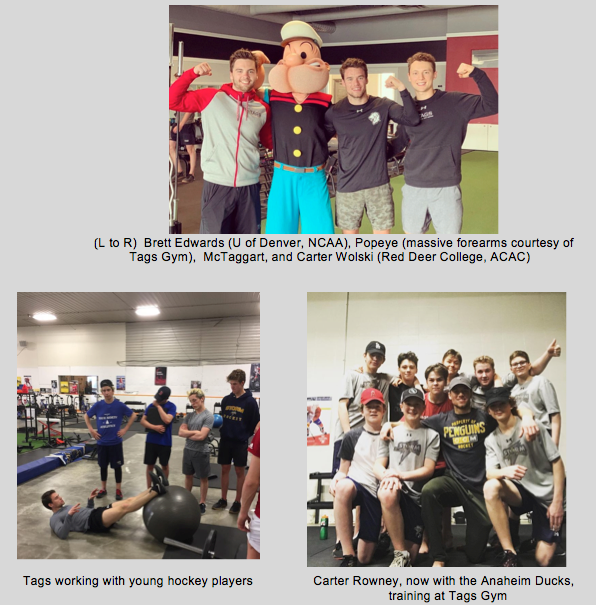