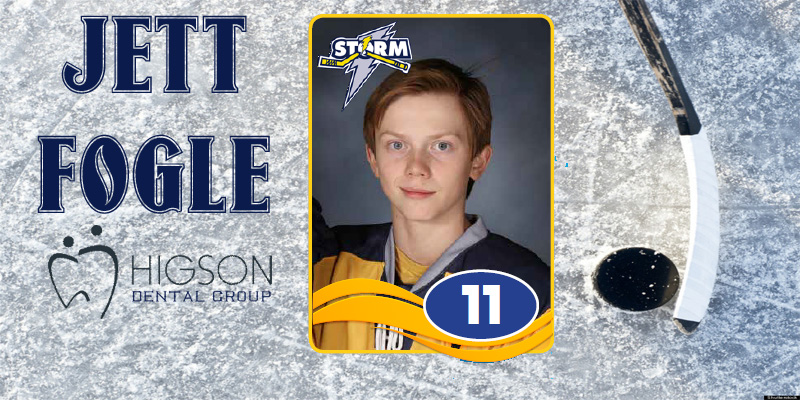 If the Grande Peace Athletic Club handed out awards for weekend play Jett Fogle of the Higson Dental Group Bantam AA club would get the trophy for best individual performance and the Golden Arrow Bantam AAA Storm would take home the team hardware.

Fogle had four goals to help the Higson Storm to a 5-2 win over cross-city rival Dreger Racing Team Storm while the GA club won a pair and find themselves in first place in the Charger North Division of the Alberta Bantam Hockey League.

Dale Horseman also scored for Higson in their win while Hicham Saurer and Ben Hilliar scored for Dreger. Shannon Sexton and Logan Sawatzky shared the Higson netminding making a combined 50 saves while Karson Bradford had 45 stops for Dreger.

Higson sits in second place in the Edmonton Rural Bantam AA Hockey League Black Division with 16 points, two back of division-leading Peace River Sabres, while Dreger is in fifth with five points.

Higson hosts the Sabres on Saturday at 4 p.m. in the Coca Cola Centre and then visits Dreger at 12:15 p.m. Sunday in the Crosslink County Sportsplex in Clairmont. Dreger visits the Whitecourt Wolverines on Friday.

A pair of wins over the visiting Spruce Grove Saints has propelled the surprising Golden Arrow team to top spot in the Charger North Division of the ABHL.

They have 10 wins in 20 games to go along with four ties for 24 points - the same as the Lloydminster Bobcats.

On Sunday, Carter Hensch had a pair and Pat Green, Steel Burke, Kyler Watson and Shantz a single in a 6-2 win. Vaughn Kaliel made 27 stops.

GA hits the road for three this weekend - Friday at Edmonton CAC, Saturday at Red Deer Chiefs and Sunday at Fort Saskatchewan Rangers.

The Ernie's Sports Experts Storm split a pair on the road in Alberta Midget Hockey League play on the weekend.

On Saturday, Ty Toews had two and Campbell McLean and Cam Wiebe singles, and Terris Lappenbush made 32 saves, in a 4-1 win over the Calgary North Stars.

Sunday was a different story as ESE fell 6-0 at the hands of the Calgary Buffaloes. McCoy Blackwell made 43 saves for GP in that game.

This coming weekend they are on the road again for games Saturday at the Edmonton Gregg Distributors and Sunday at Edmonton K of C Pats.

Then they head to the prestigious Mac's Tournament in Calgary.

They are in Pool 5 in the 25-team tournament.

They open Dec. 26 against the Calgary North Stars and then have games Dec. 27 against the Saskatoon Contacts, Dec. 28 vs. the Vancouver Chiefs and then finish round-robin play against the Duck Lake Blackhawks.

Ernie's is in second place in the Dodge Division of the AMHL with 12 wins and a tie for 25 points, 11 back of division-leading St. Albert Raiders.

It was a rough weekend for the Peaceland Directional Drilling Storm in the Northern Alberta Midget AA Hockey League.

They fell 5-1 to the NEBC Trackers on Friday and 4-3 to the Strathcona Warriors on Sunday.

Mason Kyllo had the lone goal and Owen Taylor made 42 stops for PDD in the first game and Kyllo, Kjelt Sandboe and Liam Morrow had the goals and Tyler Burwash made 37 saves in the second game.

PDD sits in third place in the Milltech Group Division with 21 points, five back of division-leading NEBC.

On Sunday they host the Wainwright Polar Kings at 10 a.m. in the Coke Can.

The Boston Pizza Storm also came up empty in two games losing 5-3 to the St. Albert Flyers on Saturday and 7-1 to the Edmonton SSAC Bulldogs on Sunday. Both games were in Edmonton.

Tyson Buchan, Devin Johnson and Carter Kreller had the goals and Connor Stojan made 35 saves on Saturday while Rhys Doyle had the lone goal and Tye Georgeson made 46 saves on Sunday.

Next action for BP is after the new year with games in Edmonton - Jan. 4 at the Bulldogs and Jan. 5 at the MLAC Leafs.

The Access Dental Storm of the Rural & Edmonton Midget 15AA Hockey League had the weekend off.

They continue their season-long road trip with games Dec. 21 at the Sylvan Lake Panthers and Dec. 22 at the Red Deer Chiefs. Access is 12th in the league with one point, 30 back of league leading Edmonton SSAC Cameron Homes.