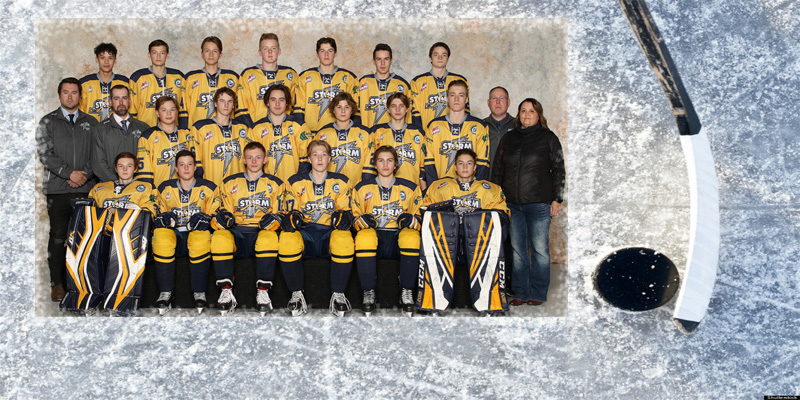 Last season the Grande Peace Athletic Club Golden Arrow Bantam AAA Storm finished up the season with five wins in 33 games and last place in their division in the Alberta Bantam Hockey League.

What a difference a year makes!

As the GPAC club heads towards the halfway point of the season they find themselves tied for top spot in the Charger North Division with eight wins, five losses and three ties - locked in a first place battle with the Lloydminster Bobcats.

Two of those eight wins came on the weekend against the Leduc Oil Kings on home turf - 6-1 on Saturday and 5-4 on Sunday.

Zach Shantz led the charge on Saturday with three goals while Carter Hensch, Devon Barclay and Reis Nylan had singles. Nathan Crawley had 23 saves in the GP net.

On Sunday, Hensch had two goals and an assist while Shantz, Spencer Rheaume and Steel Burke had singles. Vaughan Kaliel made 31 saves.

GA heads east to take on the Bobcats in games Saturday and Sunday.

The GPAC Ernie's Sports Experts Storm grabbed three of a possible four points on the weekend following a 3-3 tie with the Leduc Oil Kings on Saturday and 5-1 win over Edmonton SSAC on Sunday in a pair of home tilts.

ESE sit in second place in the Dodge Division of the Alberta Midget Hockey League with 21 points, five back of division-leading St. Albert Raiders.

The GPAC Peaceland Directional Drilling Storm played one on the weekend against the Lloydminster Blazers and skated away with a 5-3 home win.

Mason Khllo had a goal and two helpers while Jaydon Gordey, Aiden Brown and Tyler Buchberger had singles. Tyler Burwash was in net makiung 20 saves.

PDD sits in second place in the Milltech Group Division of the Northern Alberta Midget AA Hockey League with 19 points. They host the Peace River Royals on Sunday at 12:30 p.m. in the Crosslink County Sportsplex in Clairmont.

The GPAC Boston Pizza Storm of the Alberta Minor Midget Hockey League garnered a point on the weekend after tying the PAC Saints 2-2. Trey Stephenson and Rhys Doyle got the goals and Tye Georgeson made 36 saves for the Storm, who are in Sherwood Park and Cochrane for games this weekend.

They sit in 11th place in the North Division with nine points.

The Access Dental Storm are a first-year team in the Rural & Edmonton Midget 15AA Hockey League with part of their acceptance into the league, for this year, based on playing all of their games on the road.

On Saturday they made some history with their first-ever point after battling the St. Albert Royals to a 4-4 tie.

Access will be in Sherwood Park and St. Albert for games this weekend.

They are 11th in league standings with no wins, seven losses and that big tie on the weekend.

Both GPAC teams involved in the Edmonton Rural Bantam AA Hockey League were in action on the weekend.

The Higson Dental Storm, on the road, tied the Strathcona Warriors 3-3 on Saturday and fell 6-2 to the Whitecourt Warriors on Sunday.

Higson, in second place in the Black Division with 14 points, host the division-leading Peace River Sabres on Saturday at 2 p.m. in the Sportsplex.

The Dreger Racing Storm of the ERBAAHL also played twice on the weekend on the road losing twice to the Lloydminster Blazers - 9-2 on Saturday and 6-0 Sunday.

Brayden Bissell and Bill Barbarich had the goals and Karson Bradford made 37 saves in the first games while Keagin Kelln made 35 stops in the second contest.

Dreger, in fifth in the Black Division with four points, host Whitecourt on Friday at the Sportsplex at 7:30 p.m.